Below is a list of other Lodges that hold their meetings at the Corby Mason Hall, 27 Rockingham Road, Corby, NN17 1AD;

Below is a list of other Lodges that hold their meetings at the Kettering Mason Hall;

It was agreed the lodge should take its name from the Willow Brook which flows through Corby.

Other Founder members came from Chichely and Cytringan Lodges, the latter providing the Two Grand Lodge Officers responsible for overseeing the arrangements for the founding of the Lodge, namely W. Bro. Harold Davis and W. Bro. Colin F.Seddon.  W. Bro. Davis was the Director of Ceremonies of the Lodge for the first Five years and it’s Mentor for the first 20 years. 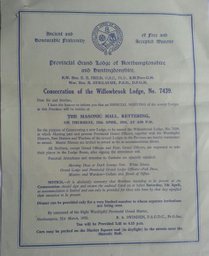 There not being a Masonic hall in Corby the Lodge was established at the Masonic Hall in Kettering on 12th April 1956. The first Master W. Bro. James Macklin was followed through the chair by his son W. Bro. Bill Macklin 20 years later. W. Bro Brian Jackson was the first candidate initiated into the Lodge to become Master in 1965 and his son W. Bro. David Jackson followed suit 15 years later both as Master and DC of the Lodge. W. Bro. John McWhinnie, whose father WBro. McB McWhinnie, was a Lodge founder and Master in 1960, also progressed through the Chair of the Lodge in 1996. He also went on to become Director of Ceremonies for a number of years.

The suppliers of the Willowbrook Banner also submitted a design for the Badge of the Lodge but W. Bro Stanley Date of Perseverance Lodge No455 submitted a sketch for consideration which was adjudged to be more appropriate and that design now appears on Lodge circulars and the banner of the lodge. In accordance with normal practice the Founders made a gift of a Collar and Jewel for the office to which they were appointed and collectively met the cost of the new Banner.

Willowbrook is ostensibly a Corby Lodge although it has never held a meeting in Corby however when the Masonic Hall at Corby was opened the members decided to continue meeting in Kettering. The current membership reflects equal representation from Corby, Kettering and surrounding villages.

This happy Lodge aims to combine dignity and humour, whilst adhering to the ritual and laws of the craft